“Let’s get kayaks,” I exclaimed to my husband James as we both sat staring at a man on a bright yellow kayak at Rock Island State Park near McMinnville, Tennessee.

My husband had never fished from a kayak. He had spent his life coaching football and being a high school principal. His fishing days had been minimal over the early stages of his career, but it was time for some built-in time for relaxation. What better way to do it than on a kayak?

As he usually does, my husband humored me on my idea of buying kayaks, and soon after the day of Kayak admiration and envy at Rock Island, we set about selecting a pair of kayaks for ourselves. We were compete rookies. We could have given new meaning to the term “newb.” We knew very little about kayaking, but as we are both educators in our careers, felt we were up to the task of learning.

Five years have now passed and James and I have certainly learned the ins and outs of kayak fishing, mostly by trial and error. We have also learned to mesh our fishing styles so we work as a true team on the water. And of course, there is always competition between us. Not from the typical male vs. female paradigm, but from the “who did their research on bait presentation, patterns, and weather fronts,” this week.

Fishing with my husband has brought an added dimension to our marriage. We both have kayak fishing as a hobby to share between us. It’s been an amazing opportunity for us to explore and test limits and personal comfort zones.

Before kayak fishing, I had a tremendous fear of snakes. Since we kayak in the snakes natural habit, I had to overcome my fear of the oftentimes vilified creature. My husband helped me learn how to identify a poisonous snake vs a non-poisonous variety. This information came in handy the day that I had a Northern Water Snake curiously approach my kayak. I was petrified! As the snake came closer, I kept my trusty Bending Branches Angler Pro in hand, just in case I had to paddle away quickly and make a fast escape. The closer the snake got to me, the easier it was to Identify it as non-poisonous.

Now, when my husband and I fish together, he takes the “lead” role as the official snake scout, and I’m good with paddling just slightly behind him; at least until I am officially less jumpy when I see a snake. 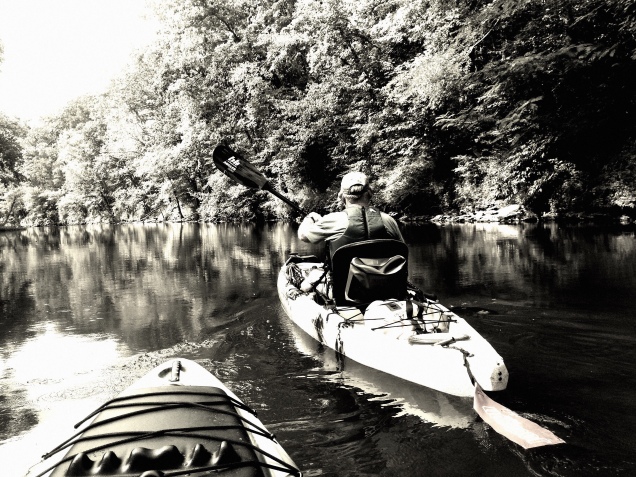 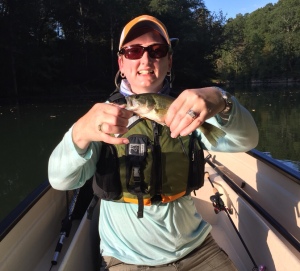